Photosynthetically Active Radiation (PAR) is the part of the electromagnetic spectrum that drives photosynthesis. It has traditionally been defined as being around the same wavelengths as visible light, from 400-700nm. 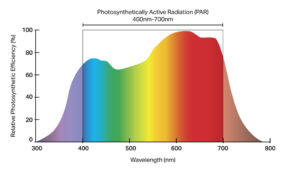 In reality, plants use light beyond this photosynthetic range, absorbing Far Red (700-800nm) and UV (280-400nm) that can trigger responses in growth structure, fruiting/flowering, and secondary metabolite production.

While photosynthesis converts light, carbon dioxide and water into compounds essential for plant growth and reproduction – known as primary metabolites – secondary metabolites give plants their distinctive smells, tastes, colours and medicinal effects (such as cannabinoids in medicinal cannabis).

UV light around 400nm causes mild stress responses in plants that can increase secondary metabolite production. Stronger UV light below this wavelength – especially in the low UVA (315-400nm) and high UVB (280-315nm) ranges – elicits the same response, but not only risks rapid DNA damage, it also breaks down the same secondary metabolites the plant is trying to produce to protect itself (from DNA damage).

At the other end of the plant spectrum, Far Red has a synergistic effect with Red light (600-700nm) that compounds photosynthesis (known as the Emerson Effect), as well as triggering and accelerating fruiting and flowering.

Many commercial LED grow lights have no UVA, no violet (<430nm) and no Far Red, yet are still described as “full spectrum” – even though they are missing some of the most important parts of the PAR spectrum due to cost-cutting or poor design.

The High Light 420 series is one of the few “true” full-spectrum LED grow lights on the market with photosynthetic violet (400-430nm), UVA (1%) and high levels of Far Red (10%). Plant scientists now recognise the importance of this extended PAR range, and some have coined the term “ePAR” to include photosynthetic light from 400-750nm.*

Unfortunately, most PAR meters only measure 400-700nm, so any photosynthetic light outside this range is not counted, which can lead to incorrect readings.

The PAR maps published here include ALL light emitted by our High Light 420 series LED grow lights – even though most hand-held spectrometers will read 10% less (due to more than 10% of light emissions being outside the 400-700nm range). This is important to understand, as the High Light 420 series will be up to 10% stronger than other LED grow lights for any given PAR reading.

* Scientific Opinion: Why Far-Red Photons Should Be Included in the Definition of Photosynthetic Photons and the Measurement of Horticultural Fixture Efficacy

Spectrum is one of the most important elements in growing. But light intensity (all else being equal) is more important. Too much light can be just as detrimental as too little.

To ensure your plants get the correct amount of light, you need to work out how many photons an LED grow light emits over a given area in a given time, and how its intensity varies over the same area. An even light canopy is the ultimate goal (although there can be some exceptions). 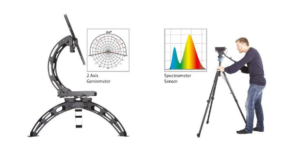 Grow Lights Australia is fortunate to have access to a Viso Systems LabSpion Goniometer – the most accurate consumer tool on the market for measuring LED efficiency, light spread and spectra.

With the help of our strategic partner, Melbourne-based LED Teknik – where all our in-house LED testing is done – we can create 3D IES files (IES stands for “Illuminating Engineering Society”) that can be loaded into computer software such as the free DIALux program to create simulated PAR maps for predicting the best LED configurations, mounting heights and driver settings for any given area.

Grow Lights Australia is one of the few horticultural LED companies in the world to do this.

The unit of measurement for PAR maps is PPFD, which stands for Photosynthetic Photon Flux Density. PPFD is a measure of how many photosynthetically active photons (counted in micromoles, or umol/μmol) hit a 1m2 area in one second. One unit of PPFD is equal to 1 μmol/m2/s.

As a general rule, tropical short-day plants need higher PPFD levels around 800-1000 PPFD during fruiting and flowering (12-hour light period), and around 550-650 PPFD during the vegetative stage (18-hour light period). This can increase to up to 1200-1500 PPFD if using supplemental CO2 to accelerate photosynthesis.

Leafy greens need lower levels of light around 200-400 PPFD, while shade-loving ornamentals such as aroids can thrive under as little as 100-200 PPFD.

Clones and some seedlings need lower light conditions until they harden off, so generally need to start at around 100-150 PPFD before increasing to normal levels.

Each simulated PAR map is based on the recommended High Light 420 LED grow light for a common grow area.

The ideal PPFD measurement will vary depending on plant species and variety, but 800-1000 PPFD is at the higher end of most requirements, so is what we aim to provide for each grow area. LED lights can always be dimmed down if they are too powerful and we can provide specific PAR maps on request.

The best grow tents and white-painted walls reflect 80-90% of all light. Actual PPFD readings may be higher or lower depending on the reflective wall surface, but we’ve found that 80% provides an accurate estimate for most indoor grow areas with a 5% margin of error.

To read these maps, note that the red outlined areas represent a single High Light 420 panel mounted to a heatsink (in pairs or on their own). The isobars represent PPFD readings. All calculations are based on an enclosed area with 80% reflective walls. Most hang heights are 50cm from the top of the canopy, which is the recommended starting point for our lights.

Lights may need to be raised, lowered or dimmed down to achieve the best results, as much depends on the variety of plant and stage at which it is being grown.