The difference between series and parallel wiring is relatively easy to understand once you know what the current is doing.

When you connect a positive charge to a LED board, the current flows through the LEDs, lighting them up, and continues until it completes its circuit back to the driver.

As the current flows through the LEDs, the amperage doesn’t change – however the voltage drops.

That is why a minimum amount of voltage is required to drive a LED board, no matter the current.

With this simplified concept, we can look at different ways to supply voltage and current to the LED board.

You may click on the image to make it bigger/clearer. 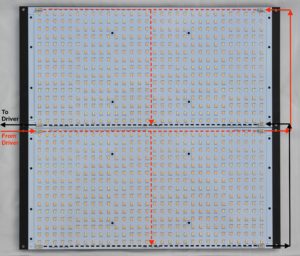 The current from the driver on the left (red line) enters the bottom board at its top-left (+) connector and splits in two along the red-dashed lines. Half the current lights the LEDs, while the other half flows through the top-right (+) connector where it exits and continues along the red arrows (external connecting wire) to power the top board.

By following the lines, you can see how the current splits up to power both boards before joining up again to flow back to the driver. Solid lines represent individual wires connecting the boards, while dashed lines represent current flow through the boards. 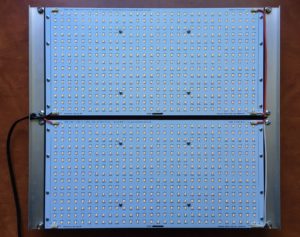 Here is a pre-wired board (red = positive, white = negative). It is wired the same as the first diagram. The reason it is called a parallel circuit is because the current runs in parallel (splits into two or more) to power multiple boards.

Because the current splits into two, each board gets HALF the current, but ALL the voltage.

In the above case we could use a HLG-240H-48A constant voltage driver to supply 48V to both boards and 5A divided between the two for 2.5A per board. 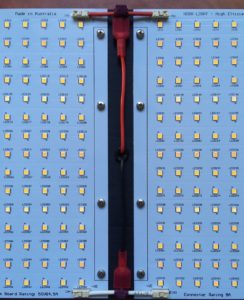 Here is another way to wire up two boards end-to-end on a double heatsink. Again, the current splits in two via the T-splice (red wires) that connects the positive connectors on each board. After lighting the boards, the current exists through the negative connectors back to the driver (white an black wires).

Why doesn’t the voltage split in half?

Because current – even when it splits – continues to carry the same amount of voltage.

What about series wiring?

Series wiring doesn’t split the current, but instead powers one board before it powers the next (in series). 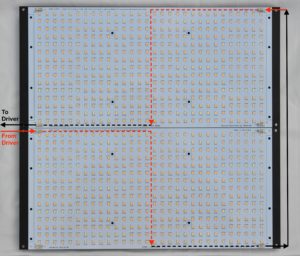 In the above series circuit, the current enters the bottom board through the same (+) connector, but this time it doesn’t split in half. Instead, the entire current runs through the first board and lights up the LEDs before exiting the bottom-right (–) connector.

Parallel Wiring = Same Voltage/Divide the Current by number of boards

Series Wiring = Same Current/Divide the Voltage by number of boards

Once you have the basics, you can wire up boards in parallel or series and know which driver to use.

At Grow Lights Australia, we generally wire our boards in parallel and use constant voltage “A” or “AB” type drivers to maintain safe voltage levels and runaway protection.

Each board connector is rated at 9A maximum.

These limitations must be observed, but it is also possible to wire multiple boards together using split wiring. If in doubt, please Contact Us. 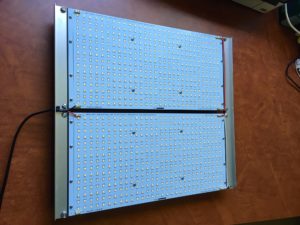 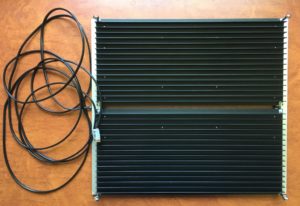