These figures are fairly conservative, as LED technology is improving every year – unlike HID technology that has improved only incrementally in the past 25 years since the introduction of the Ceramic Metal Halide bulb by Philips in 1994.

Not all light is equal. While Photosynthetically Active Radiation (PAR) refers to the visible light spectrum between 400nm and 700nm, plants are more responsive to some wavelengths than others. They also respond to wavelengths outside the PAR range.

It is here that LEDs – literally – shine. They can be tuned towards certain spectra that enhance photosynthesis and reduce flowering times (from a few days to a week for most 8-12 week varieties), as well as control plant hormones that increase fruiting or flowering, or leaf thickness in the case of leafy greens.

This becomes apparent when you compare the spectra of different lamps. 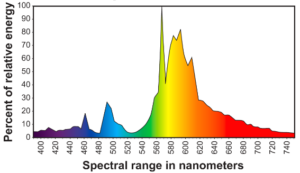 The first graph depicts an Eye Hortilux HPS spectrum showing most of its light output in the yellow and green range, with a smaller amount of red and blue. What can’t be seen in this graph is the large spike to the right of the graph representing infra-red light, or heat. The most efficient double-ended HPS lamps have an efficiency of 1.8-2.0 umol/j (micromoles per joule – more of which later), while the least efficient single-ended HPS lamps are 1.0 umol/j or less. These numbers tell us how much light is produced in the PAR region (photons, or umol) for the amount of energy consumed (joules). 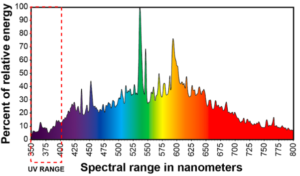 The second graph depicts an Eye Hortilux CMH bulb spectrum. This has a nice spectrum, characterised by a broad weighting and a decent amount of red and blue light, as well as some UVA – which can be beneficial for essential oil production (UV stresses the plant into producing more oils to protect itself from damaging UV radiation). However, this lamp is also weighted towards the green and yellow spectra, and the most efficient CMH lamps are still only around 1.8-2.0 umol/j. 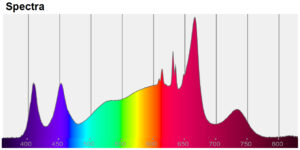 The last graph is the latest High Light 420 LED spectrum. Note the smoother, fuller spectrum of the LED, as well as the red and blue weightings with significant increases in far red, violet and UVA light targeting photosynthesis and essential oil production. High Lights have more than 50% of their spectrum in the red region, including more than 10% in the far red region (which promotes flowering and shortens flowering times for the same yield), with secondary peaks in the blue and violet/UVA regions (which increases terpenes and essential oils). These peaks coincide with Chlorophyll A and B, phytochrome, phototropin, chryptochrome and caratenoid absorption peaks (see below).

The High Light 420 series has a very high Colour Rendering Index (CRI) of 95. Sunlight has a CRI of 100; CMH lamps are typically in the low-mid 90s; and HPS lamps are in the low 20s. This can be important to indoor gardeners who require “true light” to spot leaf discolourations from nutrient, pest and other issues. The sooner gardeners recognise problems, the sooner they can fix them.

Even though the High Light 420 series sacrifices some efficiency for a greater amount of far red, violet and UVA, they still have a measured efficiency of 3.0 umol/j. Some LED manufacturers claim similar or higher numbers, but the first question is: have they actually tested their LEDs?

If they have tested (and many do not), then those that are truly higher in efficiency typically use a combination of white phosphor LEDs with monochromatic deep red (660nm) LEDs that look good on paper, but in reality lack the benefits of a “true” full spectrum grow light with added far red, violet and UVA that is specifically tuned for fruiting and flowering plants, or those that produce active ingredients (or both), including fragrant herbs and medicinal plants.

This becomes clearer when you look at the following graphs.

The graph above shows the typical plant absorbance curve. These curves represent the spectra (colours) that typical plants absorb most readily that go on to drive photosynthesis and photomorphogenesis (secondary compounds that give plants their shape, taste, smell and active ingredients). 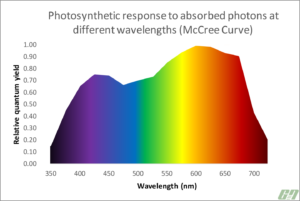 Other parts of the spectra, such as far red, have a synergistic relationship with red light that boosts photosynthesis even more. This is known as the Emerson Effect, which explains why far red is so important to plant lighting even though it is not as readily absorbed, nor drives photosynthesis on its own as efficiently as other colours.

To further complicate matters, some colours require less energy to produce than others – which is especially true of blue vs red light, where up to 1.5 times as much energy (electricity) is required to produce a blue photon compared to a red photon.

A truly efficient grow light will balance all these factors – which is why LEDs are so well suited to horticulture because their spectra is easy to change.

It is important to note that plant species and varieties are not all the same, and that different plants may respond to light in different ways. But the above curves are typical of many measured plants and are widely used in horticulture.

Most importantly, though, the curves do not always represent what different plants respond to best during different stages of growth. Most plants, for example, yield more under heavier red and far spectra throughout all stages of growth with the bonus of shorter flowering times.

However, whilst red and far red light may produce bigger flowers (fruiting and flowering, incidentally, occur in early spring and late autumn when red and far red light levels are higher), they can also cause additional stretch and lead to bigger, thinner leaves. Bigger leaves have more surface area for photosynthesis, but they are not necessarily desirable in edible food crops, such as leafy greens.

There are, however, ways to offset this undesired effect (known as Shade Avoidance) by adding more blue, violet and UVA light at the other end of the spectrum.

It just goes to show that not all spectra are equal – and neither are all horticultural lights.